Our couples birthing skills workshops have been running for the last 25 years and are the only classes of their kind in Adelaide, being independent of any institution and based on the most up-to-date medical evidence.
We aim to give you the skills and information needed to ensure the best possible birth outcomes for you and your partner.
If you want to practice pain strategies regularly, look at joining the pregnancy yoga on Friday nights.

Please note that our Couples Birthing Skills workshops fill fast and usually have a waiting list. Please book early to avoid disappointment. We can only hold your place once we have received the full fee.

Recommended by midwives and obstetricians

Midwives and obstetricians across South Australia tell us that after attending classes, couples seem so much more confident and better equipped to deal with birth.

Pregnancy yoga rewires the brain to believe that birth is possible and you can do it. It is important to attend weekly to instil confidence.

Women who take part in this style of interactive, evidence based workshop which presents birth as a positive and healthy life event, are 60% less likely to have a caesarean birth, 40% less likely to choose to have an epidural and 30% less likely experience perineal trauma than women who attend regular hospital classes.

Full payment is required with all bookings.

Cancellations will be accepted if made 4 weeks before the workshop. In this case, fees will be refunded minus a $50 administration fee. Refunds will not be made if cancellations are made after this time.

What will the Childbirth Classes cover and what Birthing Skills will I learn?

All the information is based on medical research and a wide variety of people attend from all walks of life, including many health care professionals.

What makes to workshop unique?

These workshops have been developed over many years to provide couples with the confidence and information that they need to ensure the best possible outcomes for the mother and baby.

All information is evidence based and is regularly updated so that couples are informed and can make the best choices for themselves.

Peer support is so important when you want to have a normal birth. Pregnancy classes at Coast Yoga provide a supportive environment with likeminded women.

Does the workshop include any physical yoga stretches?

All of the sessions are interactive but there is also time for questions.

An active, experiential session takes place in the morning, teaching couples how to deal with pain. Pain techniques are practiced in this session by using yoga poses to simulate the pain of contractions – after all, labour is the experience of sustained muscle contraction, just like yoga.

In the afternoon, couples experiment with guided positions for labour and birth. 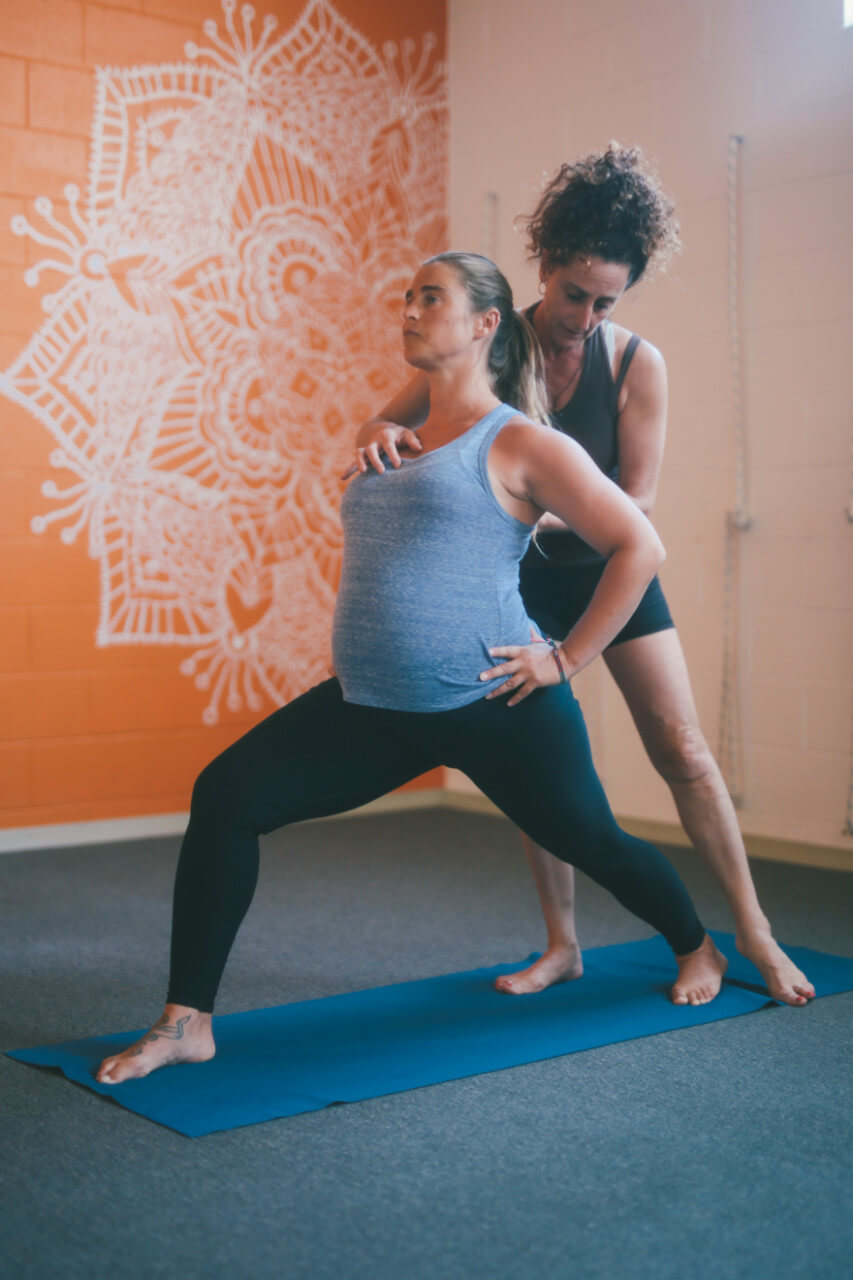 Preparing for a natural birth in Australia

“Coast Yoga has a strong active birth program and has supported women for two and a half decades to prepare for a natural birth.

Let me put this into perspective; Australia has one of the highest intervention rates in the world. Less than 15% of women here will have a birth without intervention. Home birth is almost non-existent and especially in South Australia, has been maligned and where possible shut down. We are facing an epidemic of bullying towards birthing couples in our hospitals.

As a contrast, around 80% of the women that attend Coast Yoga have natural births, less than 5% end up with a caesarean compared to the average of 36%, and most feel positive about their birth experiences. I should add that we are looking at one in three women suffering from post-birth trauma and the mental health issues associated with this.

Simply giving women the courage to challenge health care professionals, the confidence in their own bodies and the information about evidence based practice makes all the difference. I have been involved with birth advocacy for nearly 30 years, as have many others, and we cannot shake the system. The only way to change things is by supporting women to change it.”

Our childbirth classes are for pregnant women and their partners or support person.

Is it really necessary for my husband/partner to attend?

These days the father is the main support in most births. They play such an important role as advocate and loving physical support and their role can make all the difference in how their pregnant partner feels during and after the birth.

If your husband/partner is unprepared, overwhelmed and uninformed, it will only make things more difficult during labour.

The workshop is a chance for male attendees to learn about birth and the role that they can play. The men who attend, even the reluctant ones, tell us that the workshop made all the difference to them.

Why should I pay $220 for the workshop when the hospital offers birth education?

Hospital workshops are designed firstly to abide by the protocols and rules of the institution. These are not necessarily the best for you and your baby. They socialise couples into expecting to have intervention and presenting birth as a medical event (keep in mind that intervention in birth is the default care, not normal birth).

The Couples Birthing Skills workshop at Coast Yoga is designed purely to give you the best and safest information for you and your baby so that you can make the best decisions for your family. This is free of any information that may be biased towards the smooth working of an institution.

The class is also fully interactive and practical, teaching you both how to use your own resources to birth your baby.

At what stage during pregnancy should I/we attend?

It is recommended to attend at around 25 weeks of pregnancy in order to incorporate some of the content into your birth plan. This also provides an opportunity to practice the techniques learnt. Many couples attend close to term but it is completely up to you!

Pregnancy Yoga classes as an alternative

Alternatively, we run Pregnancy Yoga classes which are designed to help you stay strong, healthy and pain free throughout pregnancy in a safe way with yoga and core exercises.

These are almost an equivalent of the Couples Birthing Skills Workshops, but run weekly and are suitable for women only (12 weeks + pregnant).

During each class we discuss a different topic relevant to birth and cover techniques that are proven to help reduce pain. The class builds confidence for women and more often than not transform how they birth.

These classes are take place every Friday, running at 6.30pm – 8pm.

If I book up for the course, does this mean I won’t need to attend any antenatal/prenatal hospital sessions?

It can be good to know what the hospital policy is in regards to birth. This can help you prepare and be fully informed if you decide not to attend hospital sessions.

It is recommended that you book into the weekly Pregnancy Classes at Coast Yoga too (as mentioned above).

What do I need to bring?

How do I get to the Yoga Centre?

There is free all-day parking in the new Partridge St car park. Otherwise, there is ample parking for a fee.

Parking in Glenelg on a warm Sunday can be difficult. If possible, come by tram/bus.

“It felt so good being able talk with some of the other men about birthing. When my wife was in labour I knew that the midwife thought that the baby might be an undiagnosed breech, but I knew from the workshop that I just had to keep supporting her and protecting her from their fear.

The baby ended up being head down and we had a fantastic birth. Every time I got scared I thought back to the workshop. I got a lot out of the classes. Quite a lot more than I had anticipated. I found that it made me realise what my role entailed and that I can play a very active role in this life changing event. I liked the fact that Thomas was there as a presenter from a male point of view. A nice, friendly relaxed atmosphere.”

“Thank you Vanessa, Ros and Thomas for the fantastic, informative workshop yesterday. We came away ‘buzzing’! We feel so happy and lucky to have been told about your Couples Birthing Skills workshop. Honestly, everything that you said we had read in some great books, but to have it ‘backed up’ and to know that there are people like you three who are researching and ‘spreading the word’ that birth is a natural process is comforting to our beliefs.”

“Just thought I would send you a thank you as the skills we (myself and Stephen) learned during the workshop were invaluable. We had a lovely natural water birth. I had the birth I always wanted to have despite having a posterior labour, so thank you! Stephen was the best birthing partner – he knew exactly what to do because of your workshop. I couldn’t have done it without him. We had a baby girl weighing 3.75kg.”

“I attended the couples pregnancy clinic yesterday and I wanted to voice my absolute appreciation and praise on how the day went. Having a very hard pregnancy this far, my wife M…… and I were feeling extremely LOW. Yesterday gave us inspiration to feel great about everything again. As a father to be, I personally felt very catered for and I was thoroughly engaged the whole time. All the presenters were absolutely amazing. Everyone had such fantastic info to bring forward. I particularly loved chatting with Thomas and I appreciated the ‘male only group chat’ we had together towards the end of the day. So thank you so much for making us smile again and importantly making us feel back in control!!”