Trends come and go. Some are good, some not so. This has been Vanessa Shribman’s (Director at Coast Yoga) experience for over 26 years whilst teaching pregnant women. There is a current trend which concerns her, and which through her anecdotal experience, she believes may affect birth outcomes.

There is more pressure than ever to have a perfect body! This is defined as a body with flat toned abs, tight buttocks and sharp angles.

The pregnant body with its voluptuous curves does not fit the mold. Some women continue to work their bodies hard during pregnancy to stave off the changes that are perceived as undesirable. They are unwilling to surrender to the softening shape and inevitable (healthy) weight gain that is pregnancy. Vanessa Shribman has observed that women with a strong, tight, overdeveloped core may be more likely, at term, to have a baby in a non-optimal position, increasing the chances of a surgical birth. Paradoxically, they also desire the perfect natural birth leading to feelings of failure when the birth goes awry.

The miraculous pelvis in pregnancy and labour

The pelvis is the bony structure that forms the most rigid part of the birth canal, through which the baby has to pass during labour. It is ingeniously designed to expand by up to one third of its non-pregnant circumference through the action of the pregnancy hormone relaxin, which softens the pelvic ligaments. This allows the four pelvic joints to become more flexible, thus allowing the pelvis to widen and the baby more room to descend.

This term is probably familiar to us all. We should have a strong one! However, our approach to a healthy core needs to be different in pregnancy than in non-pregnancy. 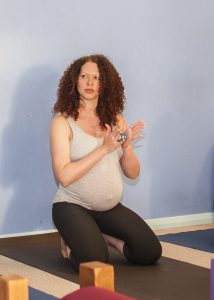 The pelvis is like a three-sided bony box. The front of the box is made up of the abdominal muscles and the floor of the box is made up of pelvic floor muscles. More specifically, the abdominal muscles include the transversus abdominus (TA) muscles which are the deepest muscles of the core and which wrap around the torso rather like a corset as well as the internal and external obliques which wrap diagonally around the torso from back to front and the rectus abdominus, commonly know as your six-pack. These muscles attach at the top to various ribs and at the bottom they all attach to the front sides and back of the pelvis. The pelvic floor attaches to the sides, front and back of the lower opening of the pelvis.

If these muscles are overdeveloped during pregnancy they form a tight drum over the uterus and over the floor of the pelvis and may provide less room in the later weeks of pregnancy (during the last 5-6 weeks) when the baby is trying to turn and find the optimal position prelabour. This may result in the baby being in a less than optimal position for birth, for example a posterior position, at term.

As all of these muscles have an attachment either directly to the front and sides of the pelvis, or indirectly, via the fascia to the back of the pelvis in which they may, if tight and overworked, restrict the optimal expansion of the birth canal during labour. Also, if the pelvic floor muscles are overdeveloped and tight, this may prolong the second stage of labour leading to maternal exhaustion, foetal distress and a surgical delivery.

Considering the above, exercise regimes that target the abdominals should be avoided after the first trimester.

Strong, targeted abdominal workouts which include the plank, sit-ups and side plank increase the load on abdominal muscles which are already stretched by the growing baby. This may lead to a separation of the rectus muscles as well as restriction of the pelvic space in later pregnancy and birth.

Exercise to do during pregnancy

It is important to keep the pelvic floor strong, but flexible. Learn to contract the muscles about 10% of the full force and hold the contraction while breathing and then slowly release. Don’t grip the pelvic floor muscles. Learn how to relax them completely in preparation for the second stage of labour. Practice this by sitting on a chair and feel the pressure of the perineum on the chair. Relax the perineum on to the chair seat.

The third set of muscles, which are considered part of the core, are the mid- and lower back muscles. These muscles support the back, and if strong, help to prevent lower back pain in pregnancy. 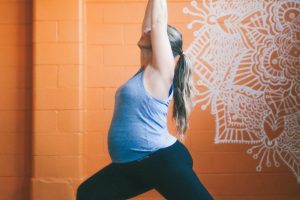 Swimming, cycling and walking will maintain cardiovascular and muscular strength during pregnancy. Yoga (such as the pregnancy yoga classes taught at Coast Yoga), done with good instruction from a knowledgeable teacher, is a whole body work out which is safe throughout pregnancy.

Most backbends put too much strain on the abdominal muscles, as do the focused abdominal exercises and should be avoided.

Pregnancy is a major life change. We need to surrender to the inevitability of those changes with courage and with grace, including embracing our changing body. Soon after the birth you can start to reclaim your body through an appropriate exercise program. Keep in mind that in order to breast feed you need some extra reserves and that there is still the influence of relaxin on your joints making them less stable.